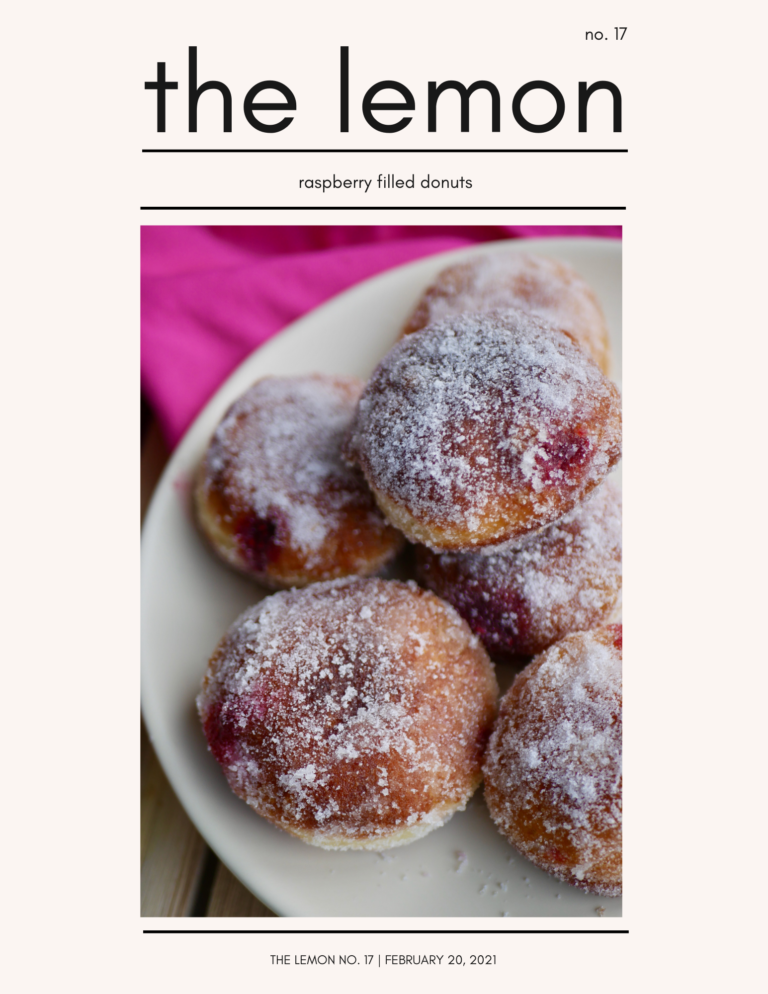 I’ve been sharing a lot of veggie and salad recipes as of late so I thought I’d take this opportunity to swing to the opposite side of the food spectrum and talk about my love for donuts.  Yeast dough that’s fried, then coated or topped with some type of sugar and usually filled with something equally sweet or fatty; what’s not to like?  I mean, besides the obvious health implications of eating too many.

For something that should be easy to get right, I have eaten a surprising amount of sub par donuts in my time.  The frozen then baked, half assed ones you get at a lot of big chain coffee and donut shops come to mind.  Those donuts are always super stodgy and leave you feeling like you’ve just eaten half a loaf of bread from some reason.

A few years ago, after the cupcake craze, donuts had their moment in the culinary zeitgeist.  Donut making competitions took up time slots on all the major foodie television networks and hip, boutique donut shops starting popping up all over big cities.  An objectively good time for one of my favourite sweet treats but one that also saw the rise of the “overkill donut”.  I realize of all people I’m probably not the one to complain about overkill when it comes to food.  Most of the time I’m the one being a little too fancy for no good reason but hey, maybe I’m just a donut specific purist.  Most of the time I prefer the well made classics to anything stuffed with marshmallow fudge brownie explosion or infused with a suggestion of elderflower.

These basic raspberry filled donuts are made with a simple, lightly sweetened raspberry jam and rolled in a coating of granulated sugar.  Basic but delicious. 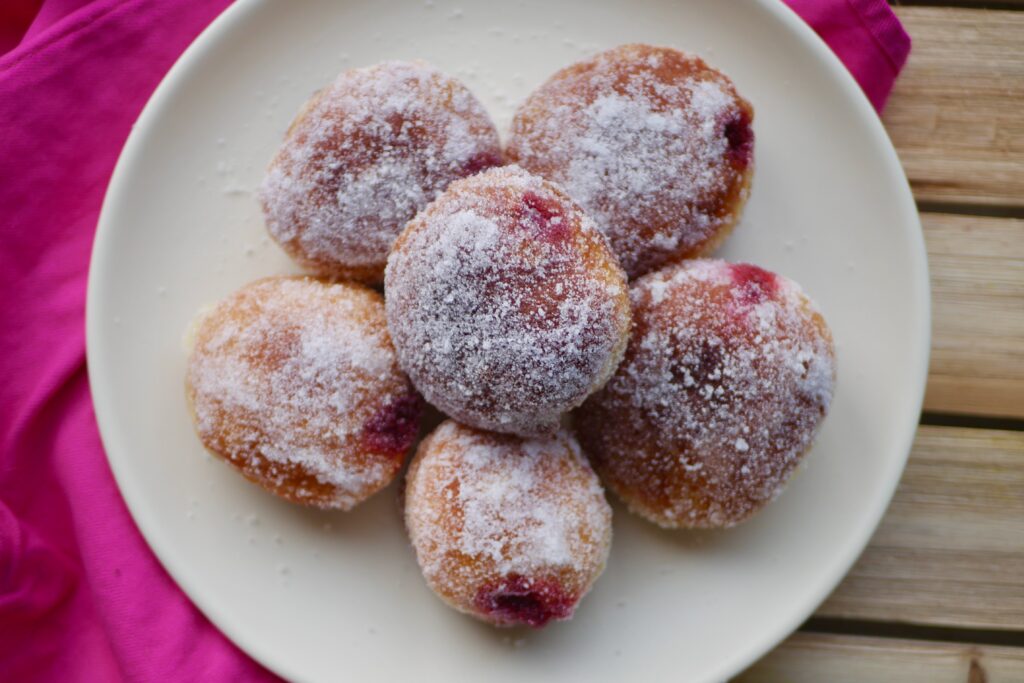 In the bowl of a stand mixer fitted with the paddle attachment, combine warm milk (around body temperature, if it’s too warm it will kill the yeast) yeast and sugar.  Give this all a quick mix and leave to activate for ten minutes.  The yeast will begin to look slightly foamy once the ten minutes has elapsed.  Mix in the salt and eggs until combined.  Then, add in the flour and melted butter in one addition mix for five minutes.  The dough should have come together into a cohesive mass but still be sticky to the touch.  I’ll include a photo of what it should look like below.  If you find the dough is really wet and almost batter like, add in a touch more flour and mix again.

You can transfer the dough to another greased bowl or tip the dough out of the stand mixer bowl, grease the inside of the bowl with a bit of butter and return the dough (less dishes this way).  Cover with cling film and leave to rise for about an hour to an hour and a half, until doubled in size.

Once the dough has doubled in size, tip it out onto a clean, lightly floured surface and roll out until it’s about 1/2 an inch thick.  Use a round metal cutter to cut out rounds of dough then place these rounds onto a sheet pan, lined with lightly greased parchment.  Make sure to use a bit of non stick spray or brush the parchment with some canola oil to prevent the donuts from sticking.  Trust me, you’ll thank me later.  Nothing is worse than having perfectly fluffy risen donut dough completely deflate when you try to unstick it from a sheet pan.

Once the donuts are all cut out and onto your parchment.  Cover the pans with cling film and leave to rise for another 30-45 minutes.

To fry, get a heavy bottomed pot on the stove and fill a quarter of the way with canola oil, rapeseed, peanut oil or another, similar neutral cooking oil with a high smoke point.   Be extra careful when dealing with oil for frying.  Make sure you have a lid for the pot close by in case of fire.  If the oil ignites just suffocate the flame by placing the lid on the pot and turning off the heat.

Heat the oil on medium heat until the oil reaches 350 F or 175 C.  Try as best as you can to keep the oil around this temperature.

Fry your donuts a few at a time flipping them with a heat proof metal spatula half way through.  They take about two minutes a side and should look golden brown with a lighter ring around the centre when they’re ready.  Remove them from the oil and toss them in a bowl of granulated sugar then set them on a fresh tray lined with parchment.

This is more like a modified purée that requires no puréeing or straining but we will call it jam.  Place the frozen raspberries and sugar in a medium sized pot over low heat.  Cook for 20-30 minutes allowing the mixture to simmer gently and slowly thicken.  After about 20 minutes the mixture should be thickens slightly and look like a loose jelly or jam.  Transfer to a bowl and place in the fridge to cool.  It will thicken a bit more as it cools but we don’t want this to be too thick so that it’s hard to pipe into the donuts.

Once the donuts have cooled, use a wooden skewer to pierce a hole in one side of the donut and use the skewer to kind of hollow out the centre of the donut a bit which will allow the raspberry filling to go in more easily.

Place the cooled raspberry filling in a piping bag fitted with a medium sized round tip or in a squeeze bottle and fill each donut with about two tablespoons of filling.  Use your best guess for this, just fill the donut until it feels heavy in your hand.

Once the donuts are filled they’re ready to serve. 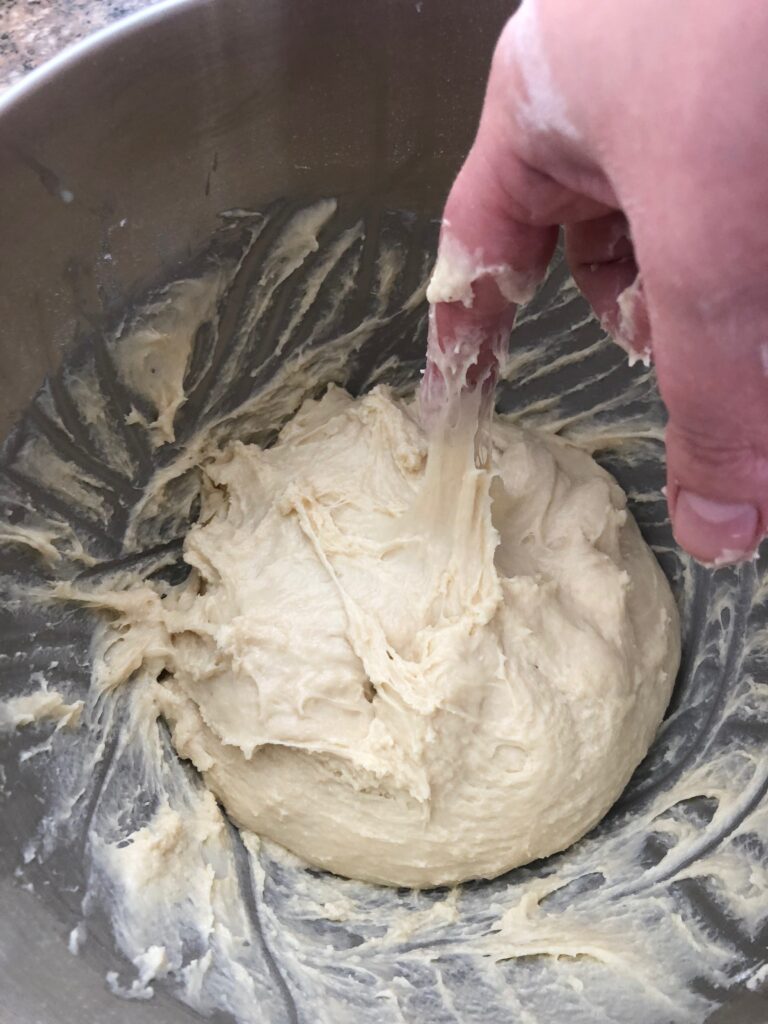 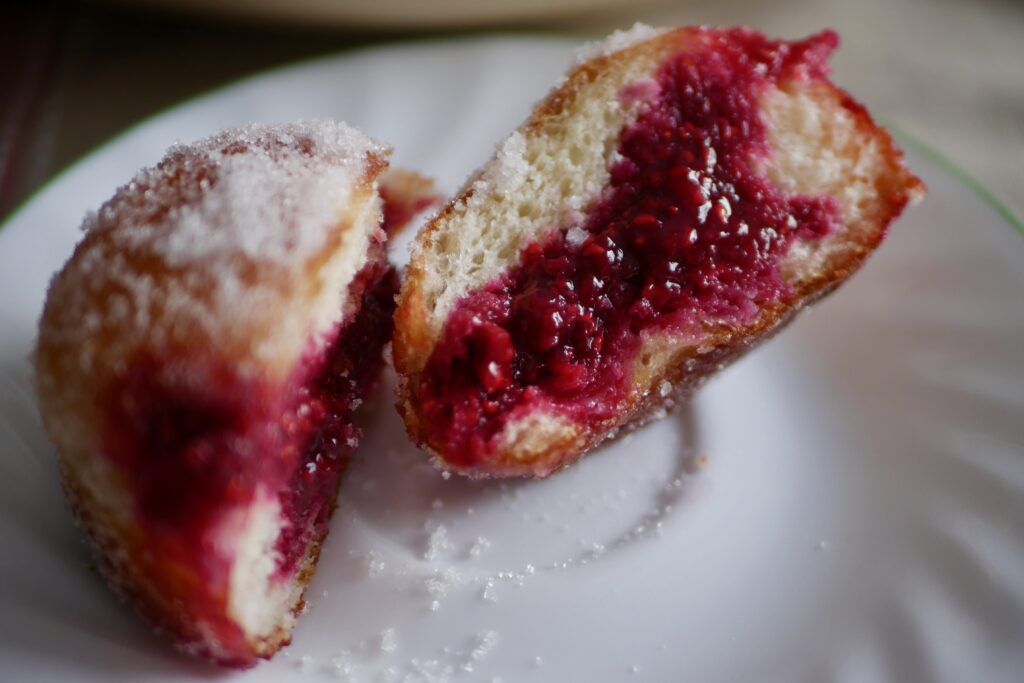 I’ve been listening to a lot of Dolly Parton this week.  She’s awesome.  That is all.

Thanks as always for subscribing!  See you next week.